Over the next year, we plan to visit 55 of Indiana's Nature Preserves
and blog about each trek within our beloved Hoosier state.


Read on to discover the catalyst of our goal.

While Christmas shopping this season, Jake & I stumbled upon a treasure we deemed as a "must have" present for ourselves.  We purchased the find with the intent that it would be wrapped and swore off use until after Christmas.

Well, our self-purchased gift never saw ribbons or bows or paper; it simply proved too good to tuck away under the tree.

Just what did you buy? you ask.  The answer?  This book: 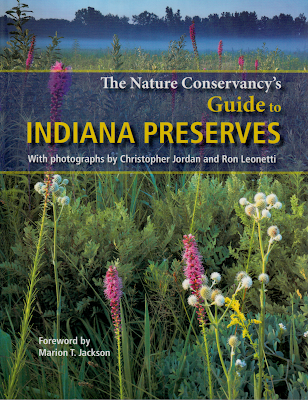 The Nature Conservancy's Guide to Indiana Preserves is superbly organized with in-depth content of 55 of Indiana's Preserves, most of which are "owned and managed by The Nature Conservancy and other land trusts."  The book is alphabetized by preserve name and color-coded by region.  Each featured preserve includes a fact list, a conservation profile, directions, and a detailed history & description of the preserve.  Multiple photos by Christopher Jordan and Ron Leonetti enhance each entry to further entice a visit.

Amazon has the book for a purchase price of $24.99.  In our opinion, the book is worth every penny (& much, much more) because of the breadth of knowledge that is packed into this comprehensive source.

What's that praying in my lavender bush?

Recently, I've been keeping my eye on this praying mantis that's been hanging around our house.  Jake & I spotted at least one more smaller mantis on our back porch this season.

Posted by smnieten at 1:32 PM No comments:

We hiked the two-mile trail at Hemlock Cliffs in Hoosier National Forest.

A tall canopy of trees surrounds the beginning of this hiking trail.
At times, the trail is narrow and steep. 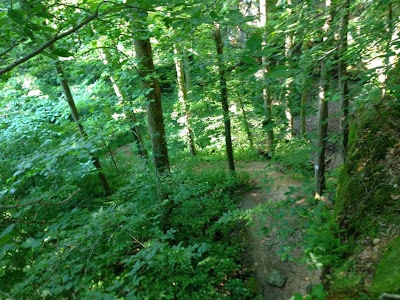 While venturing to the falls at Hemlock Cliffs, I spotted a cougar track just off the trail.  The photo on the left is the original, and the one on the right has an overlay of a cougar track. 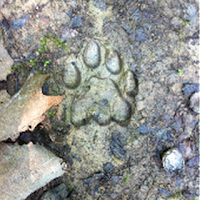 Farther down the trail we came upon stairs to take us deeper into the valley and closer to the cliffs. 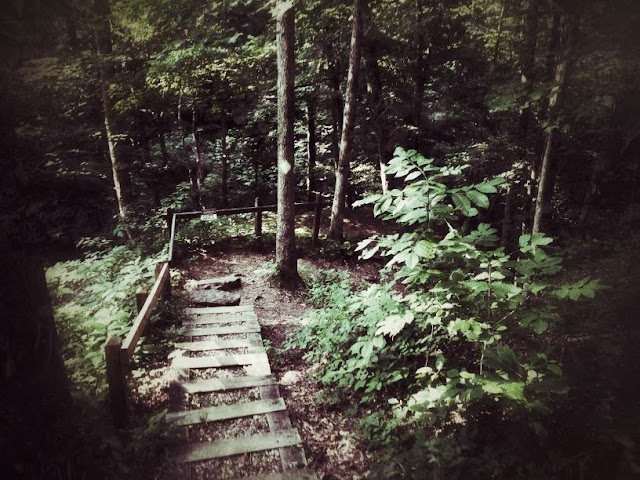 The landscape drastically changed, and the temperature cooled while climbing down into the valley. 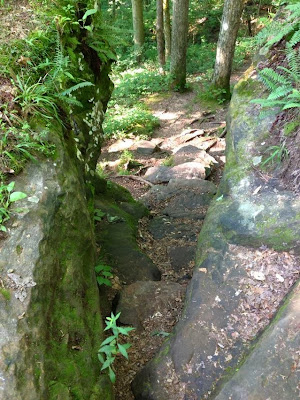 Hemlock Cliffs is the largest vertical drop in topography in Indiana. 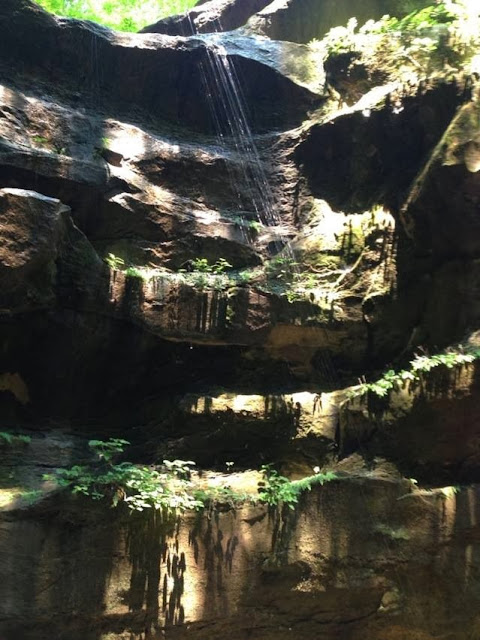 The diversity of the trail and scenery from the beginning of the hike to the Hemlock Cliffs was delightful and worth every step.

Posted by smnieten at 9:28 AM No comments:

Jake & I made pine needle tea while camping in Hoosier National Forest.

First, gather pine needles.  Avoid dry needles if possible; they lack flavor & nutrients.  Try to harvest ones that appear to be young and healthy.  Pick out & discard the driest ones.
Wash the needles if necessary. 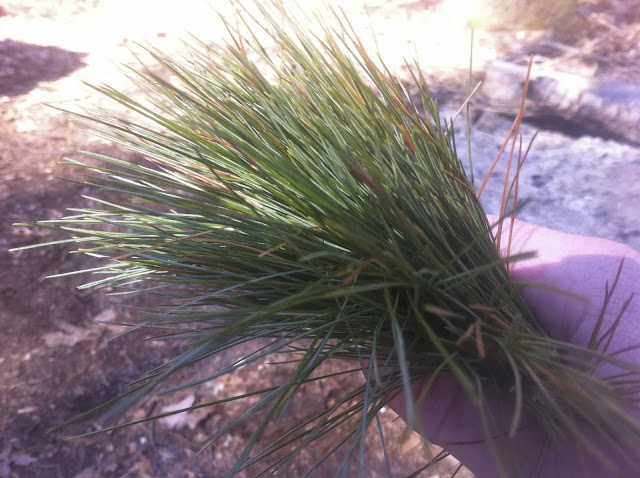 Next, put the pine needles into the water to soak for a few minutes before turning on the heat source.  Boil the water and needles for at least 3 minutes. 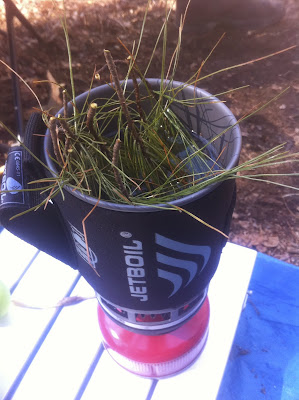 Then, cover the and allow the needles to continue steeping for another 3-5 minutes. 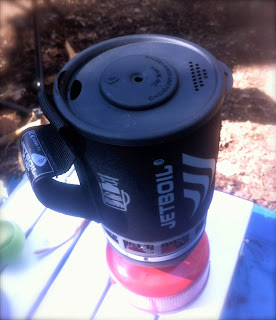 Once ready, the pine needles will be softened from their original state.  A slight change in color might also be noticeable.  Allow the tea to cool to the desired temperature and drink. 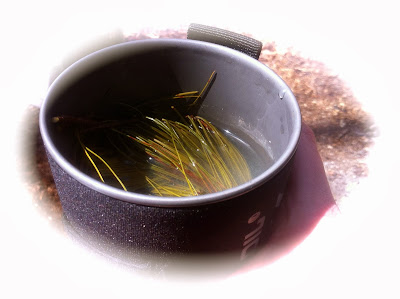 It's not a necessity to transfer the tea to a new mug or to remove the pine needles before drinking; it's merely a preference.  I do not usually remove mine.

Posted by smnieten at 2:26 PM No comments:

The first time we made sassafras tea, we weren't exactly sure what we were doing, and we only steeped stems and thin stalks; we didn't use the root at all.  The outcome was a milder flavored tea.  I now make it both ways--with stems & stalks or with roots--depending on my preference at the time.

First, locate a sassafras tree; I prefer a root shoot like the one pictured below. 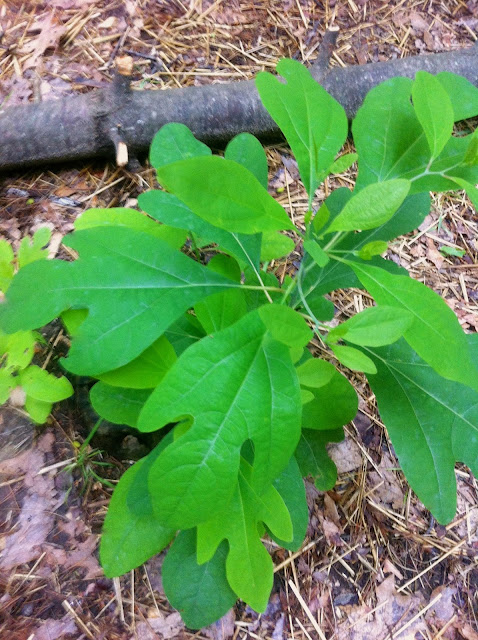 Then, strip the leaves from the the stalks & stems. 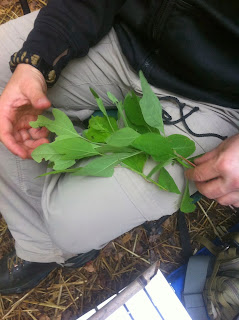 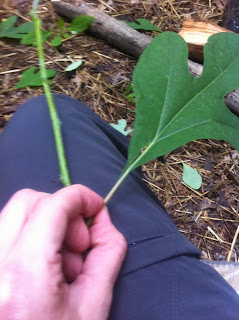 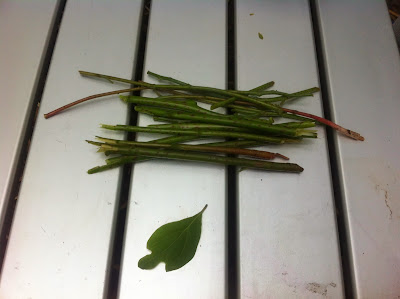 Place the stems & stalks into your pot of water.
Because we are also experimenting with boiling water in a plastic water bottle,
the bottle served as our pot. 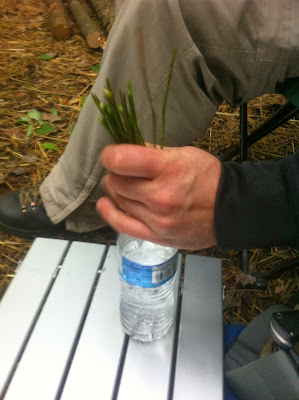 Allow the stems & stalks to soak for 15-20 minutes.
Doing this helps reduce the boiling time.  If you are using a gas stove, this would save fuel.
You can, however, begin boiling the tea immediately. 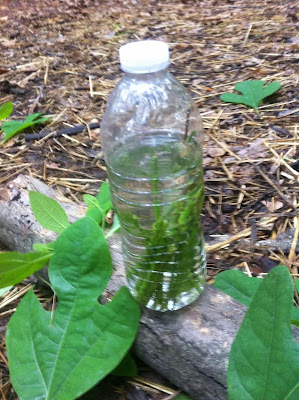 Jake used paracord & tied our bottle to a stick so that we could boil our tea over the open fire. 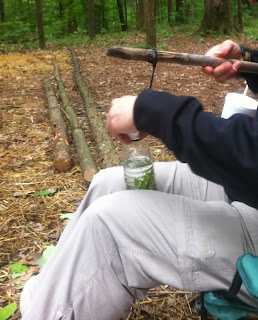 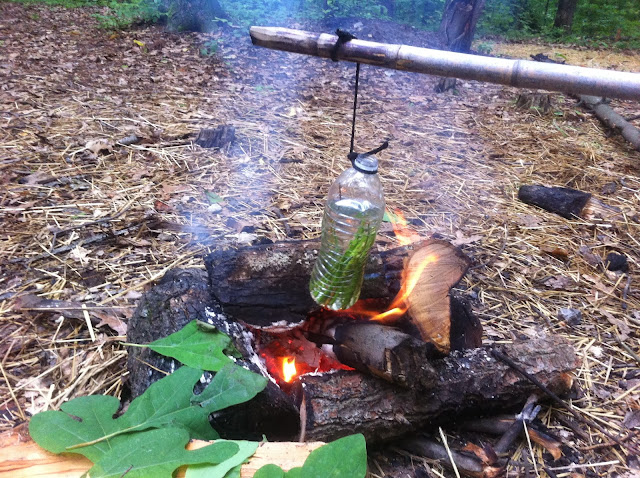 A change in the tea's color should be noticeable when it nears being ready. 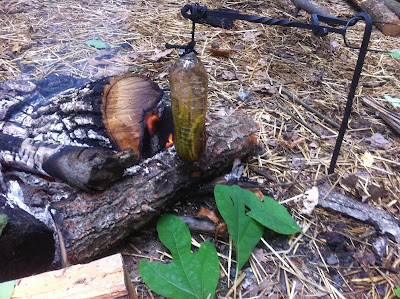 Allow the tea to steep & cool to your desire.
Removing the stalks & stems before drinking is not a necessity, just a preference.

It was a first for both tasks--boiling water in a plastic bottle and making sassafras tea. Both experiments proved successful.

Tea Suggestions:
If a stronger flavor is desired, also use (or only use) the root of sassafras.  I've found that using the stalks & stems is sometimes preferred if my water source is limited; they require less pre-washing than the roots.  With a stronger tea flavor, I enjoy adding a bit of honey if it's available.

Boiling Water in a Plastic Bottle Suggestions:
Make sure to leave a bit of air at the top of your bottle, and boil the water with the lid off.  Flames can touch the bottle without the plastic melting; however, disfiguration & discoloring will occur from the flames.  Do not allow flames to  rise up past your water level.  The part of the bottle above the water will melt if touched by fire or severe heat.  Rig up a tripod or stick & string to make holding the bottle in place easier.

I often grumble and wish myself miles away from my home in the Midwest--if I could just walk out my back door and stand in the shadows of a magnificent mountain range...or if I could only be lulled to sleep every night by a lazy river twisting itself through a dense, rolling forest of evergreens...if only....

It's in those too frequent internal (and sometimes external) griping moments when I fool myself into thinking that I could leave this state without missing the alluring beauty Indiana has surrounded me with since birth.  The truth is...I know I would miss the sights, sounds, and smells of an Indiana fall.  Her exquisite autumn sunsets still amaze me and pacify my soul.  It's moments like this when an unexpected treasure reminds me that I need to slow down, stop, and absorb more of the nows instead of the if onlys.


In honor of my home state, here's a few more glimpses of some Indiana blessings Jake & I have come to cherish over the years.

With the recent time change, Jake & I found ourselves heading home from one of my annual fall musical rehearsals in total blackness, making 6:30 feel more like 11:30 to our unadjusted internal clocks.  As we slithered our way through some of Hamilton County's newest round-abouts, the familiar flashes of farmland and neighborhoods with mammoth homes took turns erasing the undone To-Do's from my rigorous day at work.

Eye sheen of a small four-legged figure near the road snatched my attention on 166th Street near the Stonycreek Golf Club in Noblesville, Indiana.  My mind tried to make sense of the solo creature by the side of the road.  This dog-like animal was...definitely not a dog.  "A fox, Jake...do you see the fox?"  By the time the words left my mouth, the fox was far behind us, but not before that white triangular tipped tail seared its image in my mind.  "Wait.  What was that?  I've never seen a tail like that."  I wasn't so sure what I had seen...not until my Google search later that night.


According to Wikipedia, "the silver fox is a melanistic form of red fox."  Silver fox don their coats in a variety of colors, ranging from ash-colored to bluish-grey to entirely black with the exception of the white-tipped tail, and their pelts "were among the most valued furbearers."

"Melanism is the occurrence of an increased amount of dark pigmentation of skin...or hair in an organism...and [is] the opposite of albinism."  Panthers, squirrels, and even the coral snake are examples of other animals that can display this dominant gene.

*Paul Burwell is an award-winning wildlife photographer;
I highly suggest visiting his website Paul Burwell Photography
to marvel at Burwell's talent with his wild subjects.